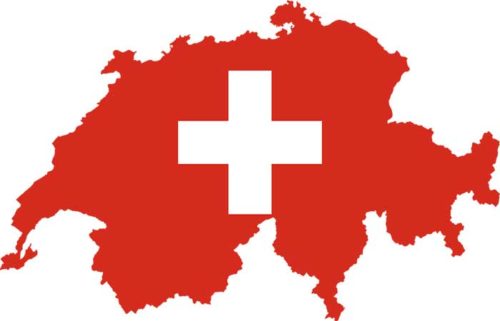 Quick: when you think of Switzerland, what first comes to mind?
My guess would be that mountains are probably among your first images.
And there are reasons why:
Few images of Switzerland exist without mountains in the foreground — or at least in the background.
In fact some people have described Switzerland as a type of mountainous island — a land-locked island closed off from the rest of Europe by a wall of mountains.
Being completely closed-off is only partly true.
Switzerland’s famous Alps strain their craggy necks up to the sky along two-thirds of the southern part of the country. And the Jura Mountains along the northwest border occupy another ten percent of Switzerland’s landmass.

How high is the Rooftop? 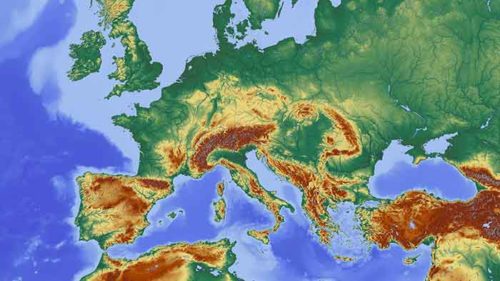 Say you wanted to yodel from the highest mountain in Europe, where would you go?

Probably you’d start by planning your vacationing in the Alps somewhere near the intersection of Switzerland, France, and Italy. This location would put you at the base of Mont Blanc, the highest mountain in Europe. (Although Mont Blanc itself is in France, its mountain range reaches into Switzerland.) So if you insisted on yodeling from this peak, you’d have to mountaineer up 15,781 feet (4810 meters) above sea level to reach the top. It could take you two or three days to reach the summit, depending on which route you chose. [1]

And you wouldn’t be alone.
Over 30,000 people from all over the world climb Mont Blanc each year, and in the summer, around 200 people a day reach the summit. (As a yodeler, would you welcome such a crowd?)
And speaking of crowds: because the mountain is so popular, you would think that climbing on it would be quite safe. Yet an average of 24 people die each year climbing Mont Blanc. (As Reudi would advise: please prepare before you go…) [2][3] 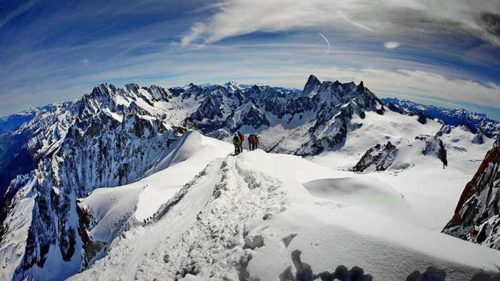 With so much of Switzerland being dominated by mountainous terrain, you’d be forgiven for thinking that most Swiss people live in the mountains.
Unexpectedly, most do not.

The Swiss plateau occupies 30% of the whole country. It is partly flat — but mostly hilly — and is refreshed by several large lakes and three major rivers. Half of this plateau — half of this 30% (or 15% of the whole country of Switzerland) — is given over to agricultural use. A quarter of the plateau is taken up with forests and woodlands, and the remaining quarter of the plateau is home to Switzerland’s five largest cities — Zurich, Geneva, Bern, and Basel — plus many small towns and villages.

Would you have thought that this small stretch of highland would be one of the most heavily populated areas in all of Europe?
In the largest Canton of Graubünden, lying entirely in the southeastern Alps, the population density tumbles to 27 people per square kilometer, or 70 people per square mile. [4] Strangely though, there’s no feeling of people stumbling over one another on the plateau.
In fact, Zurich, Geneva, and even Bern continue to top the lists of “best quality-of-life cities in the world.” [5] 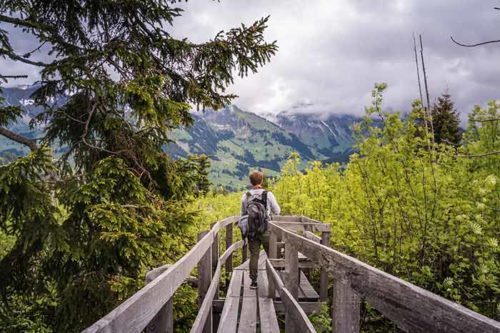 The fact that the majority of Swiss live on the plateau doesn’t mean that their mountains are left unnoticed, unvisited or unclimbed. You read above that Mont Blanc is host each year to 30,000 people, most of whom are from countries outside of Switzerland.  Yet Switzerland gets its share of visitors who hike and climb and enjoy the scenery from idyllic trains throughout the Alps from west to east. The Swiss themselves, however,  prefer to travel to their southeastern mountains to relax, hike, climb, mountaineer and ski…

So you can bet that when the Swiss think of Switzerland they think of mountains, too!

They don’t need to travel far at all to breathe in the fresh air, stretch their legs, or get their adrenaline going with a bit of a mountain climb. They have only to set out on regular Saturdays or Sundays for walks along the trails and mountainous foothills right outside their towns or villages.